tabla for all
tabla para todos 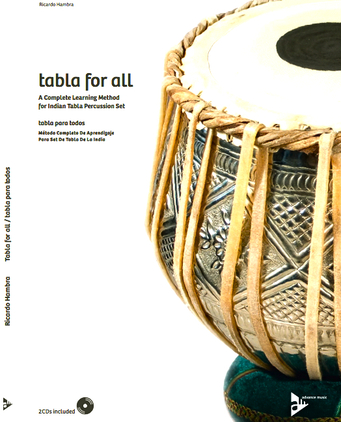 Tabla for All is a complete learning method for Indian Tabla Percussion set.
It's been developed by World Percussionist and Singer Ricardo Hambra, who's interest in the Tabla science expands two decades of study, research, recordings and live performances.

It includes: 100 pages with explanations, graphics, pictures, stroke techniques, rhythms, compositions, tuning, etc. plus 2 CDs with 70 examples to play along with the method.

Tabla for All has been published by Advance music, Germany; a leading music education book publishers.

To purchase a copy of TABLA FOR ALL safe and secure directly from us, click on the button bellow,
We ship worldwide, thank you!
Select your option bellow, and easy checkout with Paypal or Credit Card
or
Buy with credit card
Tabla for All includes an introduction to the history and origins of Tabla, how to play the basic strokes or Bols (Ta, Ti, Tin, Tite, Dha, Dhin, etc.), development of rhythms or Talas (Tin Tal, Dadra, etc.), and how to read, play and write fixed compositions like Kaidas, Variations, Tihai, etc.

All explained and analyzed in a simple way for everyone to understand, featuring Vocal Percussion as a traditional oral form of learning by recitation of strokes, rhythmic cycles, compositions and improvisation. 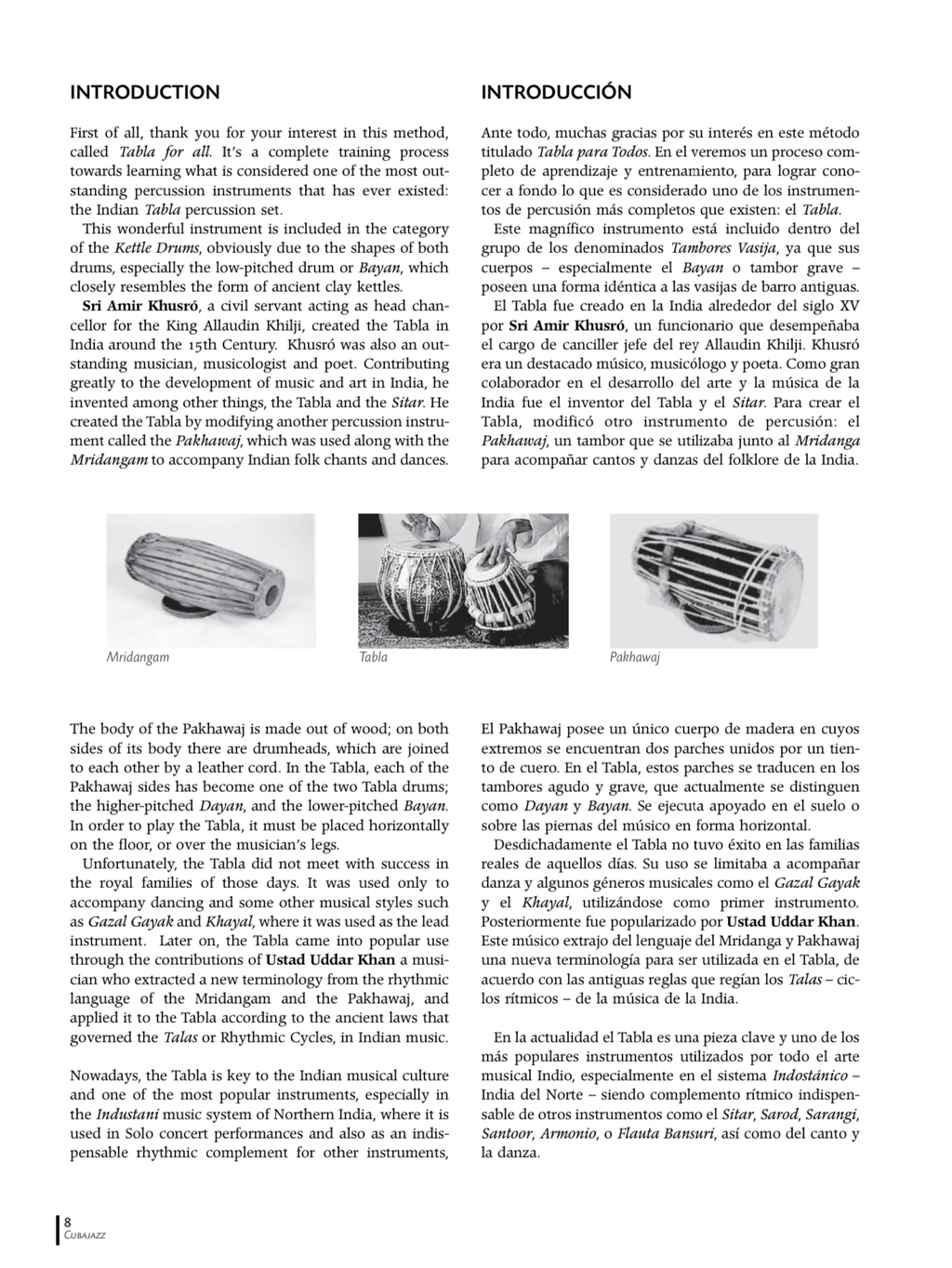 As part of the follow up with TABLA FOR ALL, there is a youtube playlist with video examples of the book.
Here's a video example of TA:
Bellow is an example of a basic stroke or Bol called TA as it appears in the book: 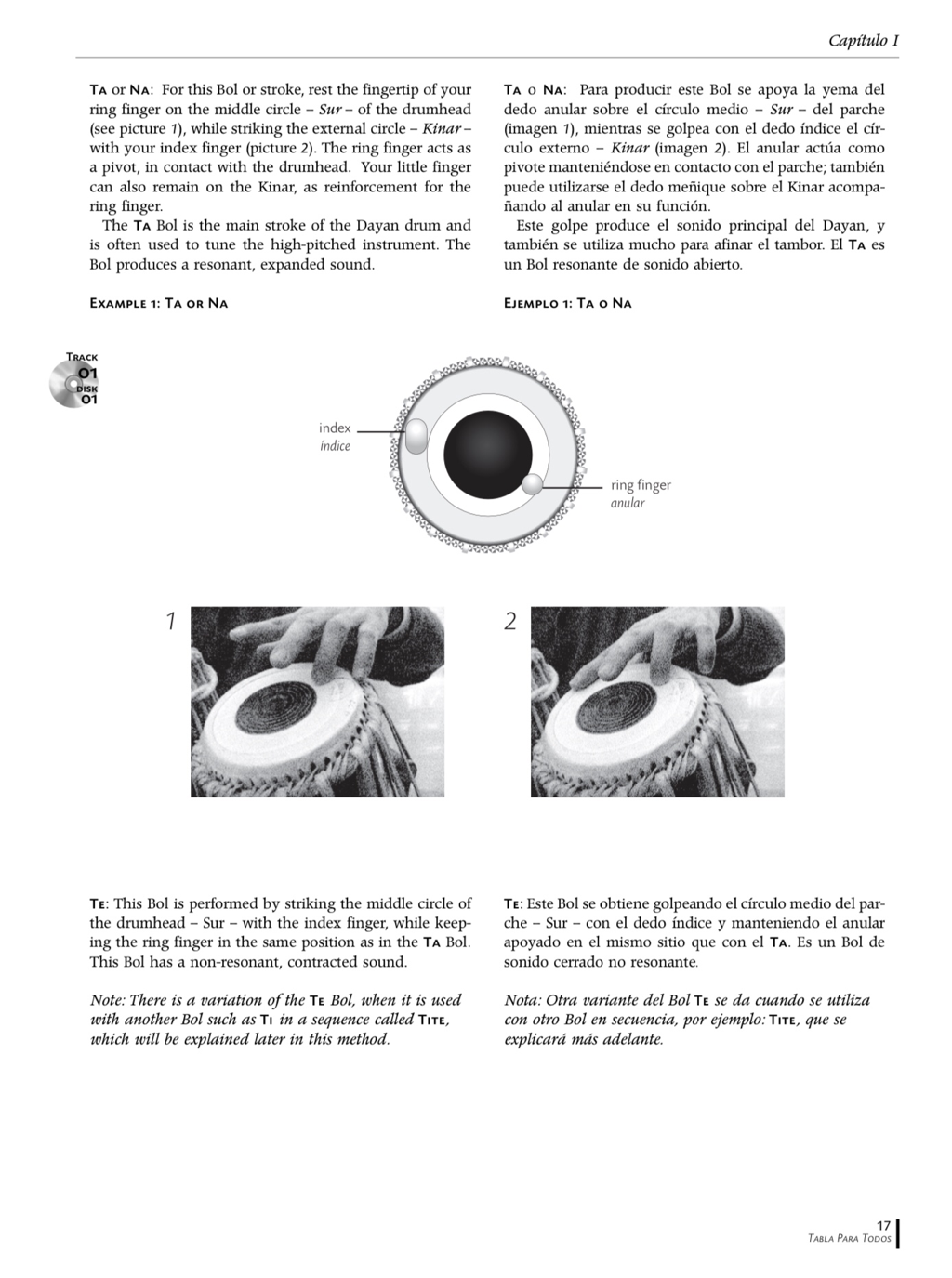 Tabla for All is a great workbook, which invites to explore the amazing art of India’s rhythms and sounds, providing you with examples that clearly explain each topic.

Tabla for All will help you to understand and enjoy India’s sophisticated Industani music system, and for those who already know about the Tabla, it has several new Talas or rhythmic cycles and compositions to learn and practice.

Below is a video, audio and graphic example featuring one of the most popular rhythmic cycles in Indian music, the Tin Tala:

The next step is to learn fixed compositions called Kaidas, this graphic and audio example is a Kaida written in Tin Tal: 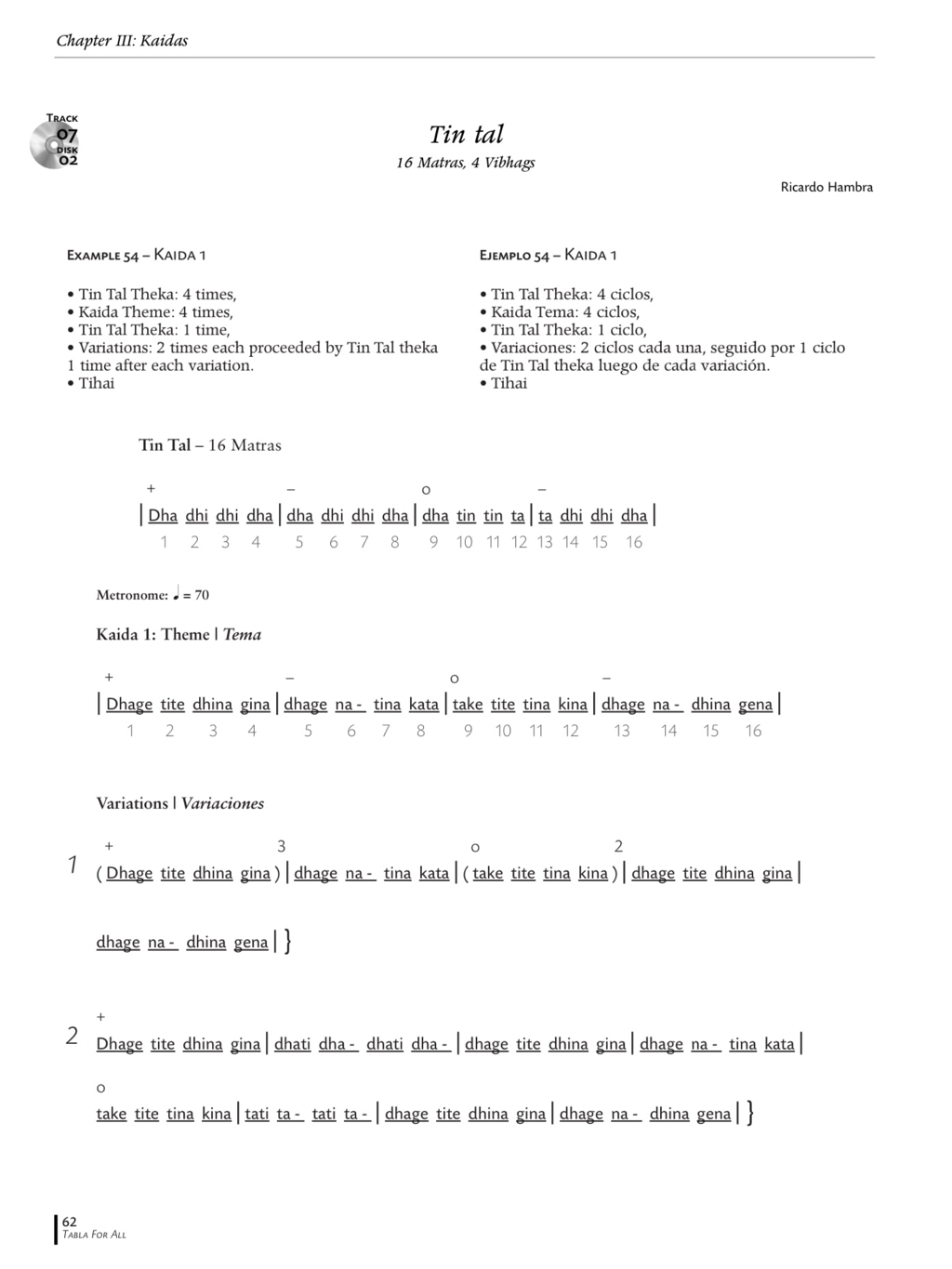 Tabla for All is published by Advance music, Germany; a leading music education book publishers. To go online for more information, click here.

Below is a video describing the 16 beats Tin Tala rhythmic cycle, enjoy:

To purchase a copy of TABLA FOR ALL directly from us,
please click on the 'Buy Now' button bellow,
ships in 24 hrs. worldwide, thank you!
About the Author, Ricardo Hambra:
.
I am basically a Music fan. I’ve listened to lots of beautiful music from everywhere. Having said that, my musical studies and professional experience as a musician, percussionist and singer, have taken me to many parts of the world, bringing me into contact with a rich variety of cultures and musical currents.

I've been studying and doing research about Ethnic and Modern music for many years, through under-graduate studies, workshops, masterclasses, traveling around the world, and learning from teachers and local artists in their towns.

India, Africa, Middle East, Eastern and Western Europe, North, Central and South America, Australia, Asia. It is an invaluable experience what is possible to learn and also share through music and different cultures of the world. Maybe I should describe my musical influences by stages:


I started to play music at 3 when my parents bought me a Bombo Legüero, an ethnic Argentinean Percussion instrument; then at 13 one of my uncles made me a present of a Drum set, which was a big push for a further career as a percussionist.

Then I discovered India, which was definitely a decisive influence in both my music career and personal life. It is because of this influence that I am able to achieve the production of this method, and I am very grateful for it.

Nevertheless, I kept my original empathy for world music styles. I have traveled around Argentina, Brazil, Uruguay, Chile, Mexico and USA, learning different styles like: Tango, Samba, Bossa, Latin Salsa, Afro Cuban and Andean music, plus Jazz, Blues, Country, etc. All of this was of great influence.

Later I started to do more research about Eastern Europe and Mediterranean music, and I worked playing Middle-eastern, Greek, Rumanian, Bulgarian, Sepharadic, Celtic and especially Spanish Flamenco music, touring with several music and Dance groups for many years during my time in Spain.

By the time of the conclusion of Tabla for All, I spend most of the time in Los Angeles, USA as a performing musician, composer, producer and teacher, leading my own music school World Music Study Center, and music productions company, Ethnic Fusion Sound.