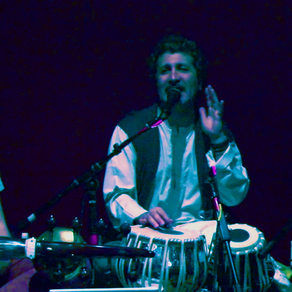 This workshop is intended to introduce and improve in the individual, the quality of Singing voice, the ability to play Percussion rhythms, get into a deeper mindful experience with a series of Energizing exercises and Interactive Free Flow movement, and completing with a joyful Dynamic meditation with live music.

All of these areas will have a series of technical, specific training exercises and audio-visual examples. See more details bellow:

The MMM workshop has 5 different areas:
All of these areas will have specific training exercises and audio-visual examples.

SINGING VOICE: It is a progressive training based on modern vocal music techniques, which will then be combined with the Hindustani SWARA chant system and KIRTAN vocal styles from India. Here are some of the areas to be covered:

• Relationship between the Heart, Mind, Breath and Voice; projecting the voice without straining the muscles
• Recycling the Attention: how to get and keep focused, training the ‘singing mind’;
• Singing as a spiritual creative process: Attention – awareness – control – pitch;
• Conscious singing: art & joy of a melodic voice;
• Singing as a source of peace and happiness, creating our own melodies and songs as a creative, healing process;

The voice as an instrument; speaking voice and singing voice- differences and similarities. Voice as a human expression; thinking and feeling our voice, differences between sound and melody. Exercises: tuning the voice, scales: major – minor; song and kirtan vocal styles performance with the whole group ensemble.
The singing voice - Introduction to the North Indian Hindustani music system:
Hindustani Ragas: a brief comment about the origins of this music system. What is a Raga? Melodic characteristics and moods or Rasa, description of the musical notes or ‘Swaras’: Sa, Re, Ga, Ma, Pa, Dha, Ni; melodic scale or ‘That’ (pronounced Tut), Thats Bilaval, Kalyan, Khamaj, Bhairav. Different times of the day for each Raga;  Sargam song form, Kirtan and Bhajan devotional song form, Thumri or ‘light Raga’, etc. Note: Each vocal form will be treated along with audio and graphic examples.
*
WORLD PERCUSSION RHYTHMS: The focus of this part of the workshop, is on the development of the rhythm sense and practical skills, through Hand Drumming and audio examples from ancient ethnic cultures, featuring: India, Mideastern region, Africa, Europe, North, Central and South America.
Students are strongly suggested to bring their own instruments (any kind of Hand drum and/or shaker, tambourine, etc.) but there will be some available for those with none.

How to translate the rhythms to the drums: How to approach a drum. Explanations about all the different strokes and drum techniques that will be analyzed during the whole workshop, positioning of the hands, postures, stroke intensities: soft – hard – slow – fast, etc; learning rhythms along with others, drum circles, ensembles, poly-rhythmic sections, improvisation.
*

ENERGIZING Exercises: Exercises include stretching, breathing and a series of 'Yogananda Self Realization Energizing Exercises' based on the tension-release technique, concentration, visualization, searching the connection between the body, mind and soul; Interactive Free Flow movement:
some exercises inspired from the Meredith Monk ‘Singing Body, Dancing Voice’ technique: coordinating the movement of fingers, hands, feet and limbs from the center of our being, walking and singing, clapping hands rhythmically along with the feet, walk, jump; introducing mindful Interactive Free Flow collective movement.

DYNAMIC MUSICAL MEDITATION: This part of the workshop involves Breathing exercises, Mantra chanting and a few guidance instructions, in order to induce deep, relaxing calmness, concentration and contemplation states of mind. Once these steps has been accomplished, a joyful meditative state of consciousness becomes as a natural consequence. It is accompanied by live music especially designed for the Dynamic Musical Meditation experience.
A few words about Ricardo Hambra:
An accomplished musician, composer, producer and teacher, Rik has an extensive experience as World Percussionist and Singer, an advance researcher in ethnic styles including music from India, Africa, Mideastern, Cuban-Latin, Brazilian, Spanish Flamenco.

He’s been touring and teaching in different parts of the world, like Argentina, Brazil, Chile, Spain, France, Israel, Mexico, USA, Netherlands. He’s been visiting India on several occasions, which includes his experience of living in India for an entire year, where he got immersed into India's philosophy and music, including Tabla set technique, as well as Ragas, Bhajans and Kirtan Vocal styles.


Ricardo is a Los Angeles resident, where he continues his career as a musician, performer, composer, producer and teacher.
For more information on our other Singing Voice or Percussion set workshops, see the links below.
Also see Ricardo’s Resume, audio and video examples, or Click here to send a message. 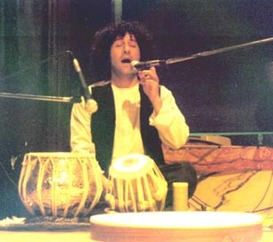 Come and join us  in a day of learning the foundation of singing Industani Ragas.
Ricardo teaches singing as a creative process, a way to establish a relationship between the Heart, Mind, and Breath. He encourages singing as a source of personal expression, creating your own melodies based on the ancient Industani music notation system called Swara Chant: Sa, Re, Ga, Ma, Pa, Da, Ni.

Classes will include:
·      Introduction to Indian music: a brief description of the Industani and Karnataka schools, its differences and similarities;  popular, devotional and classical traditions, etc

A booklet with the exercises and compositions given at this workshop will be available for purchase to all the attendants, which also includes an audio CD with examples that can be followed along with the written material.
This way every attendant will have the chance to continue practicing what has been learned throughout the day.
For more information, please send us a message, thank you!
contact us 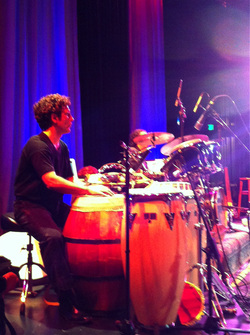 This workshop is focused on the development of the rhythm sense and practical skills, through a gradual audio and ‘on-hands’ training based on modern music techniques and some ancient ethnic cultures, featuring: India, Mideastern region, Africa, Europe, North, Central and South America. 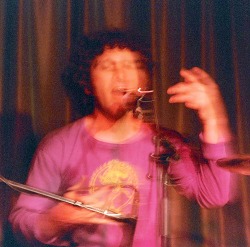 This workshop is focused on the development of the singing voice skills. It is a progressive training based on modern vocal music workout techniques, that are later combined with ethnic styles like Hindustani Raga chant system from India, Spanish Flamenco, Argentinean Tango, American Jazz & Blues, Brazilian Bossa and more.