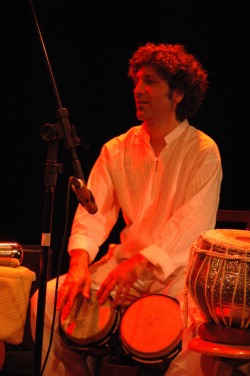 The founder of EFS is a Singer, Percussionist, Composer, Producer and Teacher.


Here's an interview on his work and career, published in About.com web site:

Question: Ok Rik, please tell us something about your current activities...

with LIBRES DEL MUNDO, a Flamenco Latin band, performing at Beats and Bites at The Viceroy, Santa Monica;  DCache Bistro Bar, and other shows around Los Angeles area.
Just released a new CD 'CHILL OUT INDIA VIBE', now in iTunes. CDBaby, Amazon stores.
Also playing with PERCUTI RHYTHM ENSEMBLE at The King King Hollywood and many other venues around California.

I'm directing a music learning center called World Music Study Center. It's located in Los Angeles, California, and is dedicated to the promotion of the Ethnic Fusion music styles from around the Globe. For more information, please click here.

Also with 'MASi' Ethnic Fusion IndiaBossaSouLatIndiOriental, another beautiful music project along with my friend and cousin Martin Cohen and guest musicians like Uriel Kitay.
http://www.myspace.com/masimusica

I'm also working in a series of workshops:'Music Movement and Meditation' and  'Ethnic Fusion Percussion & Singing Voice' ;you can see more info about these workshops here or in the Workshop's link.

I've finished a learning method written in English and Spanish languages called 'Tabla for All' or 'Tabla para Todos'. It's a complete Audio-Visual learning method suited for every level of experience.

It's an English and Spanish translated interactive workbook, that comes with 2 audio CDs and video. This method is targeted for beginners, intermediate  and advance students.
I'm planning to publish it some time this year, and will post more details about it on this page soon.
You can watch a video presentation of Tabla for All here.

I' ve been working in the past couple of years in Los Angeles, California and before in New York, USA,
I have participated in concerts as a guest musician in a Jazz Fusion trio called 'Constellation' featuring Adam Chalk: Composer/Pianist/Singer, Brett Simmons: Bass Guitar; and myself with Ethnic Fusion Percussion set and Vocals.
In a series of concerts with Matt Malley -Counting Crows Bass player- with Mohan Veena guitar, and Steve Day in Sarod, in Philadelphia.

Also, as a guest musician with 'J' wish dub' band at the Orensanz Foundation building in Manhattan. And with Captain Hilarious, A Folk Rock Fusion band at SIR studios, New York City.
A series of concerts with The Peace of Heart Choir' to non profit organisations, hospitals, shelters, etc. all around New York City.
As a solo artist, I've been playing several gigs at some Lower east side and Soho places in New York City, as well as around the NY area.

Q:  And all this music that you compose and play, how did you learn it, where does it come from?

It's been a lot of work and researching, I'm from Buenos Aires, Argentina, I've traveled throughout India many times - the last trip was on 2006; also around Europe and the Middle East; I've lived many years in Spain and the USA, always working with music as pro and teacher.

My experience comes from the passion I have for the magic music is in itself. Since very early in my life, I've been a fan of music and dance, and this passion has stayed with me all the time.

I started with Argentinean percussion, Drum set and also singing religious and devotional music with a Choir in the synagogue we use to go with my family.
I started at 14 with my first Rock & Blues band, gigging in parties, clubs and high school events.
Afterward, I started to get involved more seriously with Latin and Brazilian percussion and Jazz music, when at 20 I made my first trip to India to study Tabla and Vocal Chanting, besides Philosophy and Yoga.
That experience has changed my life for good, because the transcendence of Indian music is so powerful, that the concept I use to have regarding music was transformed completely.

From that breakthrough, I started with Ethnic Fusion music until the present.

Now I have lots of experience and feel more centered, and having lots of fun and joy with music and Arts in general. I also love painting, sculpture, dance, theater and multimedia performances. I think all Art forms are expressions of beauty and deeply enjoy it wherever I go.

Art itself nourishes me so much, that I think I'll always be open to this amazing way of human expression. And of course, the greatest artist of all, the author of all this Cosmic dream dance!

Q:  Tell us something about your music...

I have like 2 musical main branches, Vocal and Instrumental.
For Vocal music my style is basically composed of melodies, rhythms, and chords. All of them have differents music sources, for ex.:

* I usually combine Western songwriting and Indian rhythms and melodies;

(you can listen to some sound samples, and have more info in the Cd's link

There are so many music ideas that I've been developing for many years...I work all the time with sounds and concepts, both acoustic and digital, and try to learn as much as I can from any other type of music, musicians, and also from everyday people which aren't in the music world.

Q: What about your work as a producer?

I've been producing my own written material and other people's music since 1992.

It's a real task for a musician to produce, and not only to play music, because inside the studio you have to push yourself and the others to create the real magic that a music piece can express.

Live performances are superb, and my main focus as a musician; because is when the audience can get in touch with your sound and get to experience it directly, alive. And I'm very fortunate to have some of my best experiences in life when on and then off stage with the people.

While in the studio production, you have all the keys in your hand, and so it's your responsibility to get the best music during a certain period of time... sometimes you got it, sometimes not, but is a question of keeping on trying different alchemies until you reach the goal.

Yes, I'd like to say something about my experience as a teacher. I started teaching in Buenos Aires, Argentina, since 1987.
After that, I've moved to Spain and worked many years in Madrid as a director and teacher for the Ethnic percussion Department at Neopercusion Music School, until 2000.

In recent years, I have spend my time between New York, Los Angeles and Argentina.
I've been working in Buenos Aires, Argentina for about 8 months during the last part of 2007 and 2008, both as a professional, music producer, event organizer and Teacher as well.

Nowadays, I'm settled in Los Angeles, California. I'm working as a full time Teacher and Professional Singer and Percussionist, along with free lance production and assistance in the Entertainment business.

When working with music students, I feel I've developed more confidence and versatility regarding how to communicate to others something you know, and let them assimilate and then apply it in their own way.

Finally, I have the enormous privilege and experience of working and living in many countries, and thus getting to know lots of new people, often completely different in their ways of living.
Many of them very talented and sensitive human beings, others just plain, raw characters, dealing only with the immediate urges and needs.
But I've always received the same message, the same call: We are all humans, therefore respect of our differences is the only way to wellness being and successful interaction with others.

My purpose as an artist is not competition,  I just want to be somebody who lives of what he loves...
And I love Music!